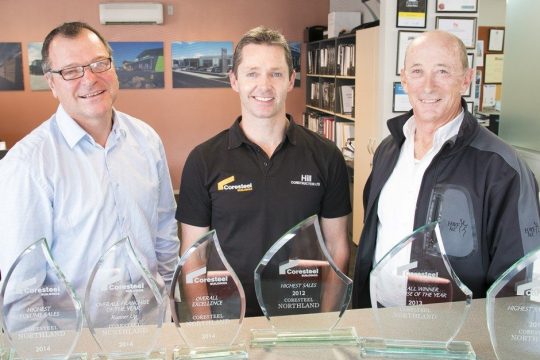 From left, James Senescall, Simon Eilering and Wayne Hill with their awards from the last few years.

The high-performing Northland franchise received the runner up award for Franchise of the Year and the Coresteel Overall Excellence Award, alongside an award for the Highest Volume of Sales for 2014.

“Northland has always been a major winner at the Coresteel awards and that’s testament to the fact that they continually punch above their weight. Their staunch commitment to their customers and the Coresteel brand has resulted in one of our smallest franchise regions performing as if they were our largest,” says Haemish Reid, General Manager, Coresteel Buildings.

Coresteel Northland’s directors Wayne Hill and James Senescall have led the business for the past five years, and have recently been joined on the board by Simon Eilering.

“Simon, who was a builder in his own right, has joined James as a business partner after buying out my shares. While I’ll still be involved in the overall management and future direction of the companies, I’m handing over the day to day running to Simon and James – two guys who share the same passion for the business that I have and who I’m confident will build on the success of the brand,” says Wayne Hill.

In the past few years Coresteel Northland has constructed a number of iconic retail and industrial buildings in Whangarei such as Pacific Motor Group, Warren Hay Marine, Marine North, Ten-4 Engineering, Commercial Diesel and Stealth Properties’ retail buildings on Port Road, together with numerous other builds.

“Coresteel was originally based around smaller sheds, yet now fits squarely in the commercial/industrial range due to the ongoing development of the software and buildings systems that have evolved over time. The quality and cost effectiveness of Coresteel has given us the ability to make large inroads into this competitive market as shown by our success to date,” says Wayne.

In addition to the Northland franchise, directors Wayne Hill, James Senescall and Simon Eilering own Coresteel Bay of Plenty franchise.  “This is an exciting growth area for us and after just a year we have quite a few prominent and large projects underway and more in the pipeline,” says James Senescall, Director, Coresteel Northland.

This news story was also featured in The Northern Advocate.