Three awards, including Franchise of the Year, Highest Sales Volume and Best Bespoke Building made all the hard work worth it for Coresteel Buildings’ Waikato franchise. 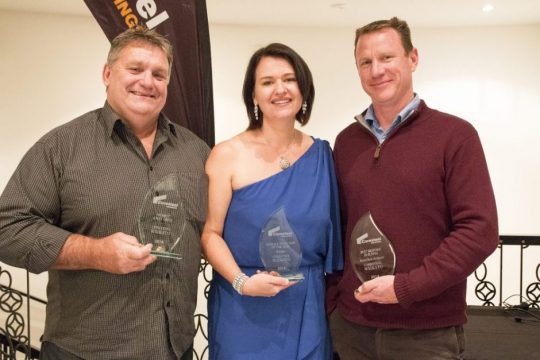 Coresteel Waikato directors from left, John Morrow, Trina White and Gary White with their awards for Franchise of the Year, Highest Sales Volume and Best Bespoke Building at the Coresteel Buildings National Conference.

The Te Awamutu-based team comprising of Gary White, Trina White and John Morrow, was the first Coresteel Buildings franchise to launch in 2008. There are now 20 franchises nationwide.

“Coresteel Waikato displayed outstanding growth in the past year and continues to maintain excellent systems and great interaction with Head Office. The team has an unwavering commitment and dedication to the Coresteel brand and so the award of Franchise of the Year was well deserved,” says Haemish Reid, General Manager, Coresteel Buildings.

The company received the Best Bespoke Building award for Hamilton Heliport Limited’s hangar facility at Hamilton Airport. “The Coresteel system allowed the owners to realise their vision of a hangar that was both practical and stylish in its design. The result was a custom-built hangar which includes two 18 metre wide bi-fold hangar doors and two levels of modern smart looking offices,” says Trina White.

The Waikato team was also awarded the prize for Highest Sales Volume for achieving the highest number of projects small or large to be completed in 2014.

“When Gary and I first started out we mainly built light industrial buildings and sheds. As our team grew and our design and build capabilities expanded our building experience developed into commercial, industrial, residential, and design and build projects,” says Ms White.

In 2013 John Morrow joined Gary and Trina as a director, bringing with him a focus on system management.

“In the seven years we have been operating our team has grown to 22 fulltime employees, including our office team of qualified quantity surveyors and project managers, and our team on the ground of LBP qualified carpenters, qualified roofers and steel erectors. Having an excellent team who specialise in these areas enables us to undertake turnkey projects with quality and efficiency.”

Gary and Trina have been part of the local community for over 17 years with a small break of 18 months in Northland, while John is a Te Awamutu local and has been in the construction industry for over 30 years.

“In the Waikato we are set aside from our competitors not only by the quality of our product, but by our customer focus and determination to always deliver buildings on time and on budget.”