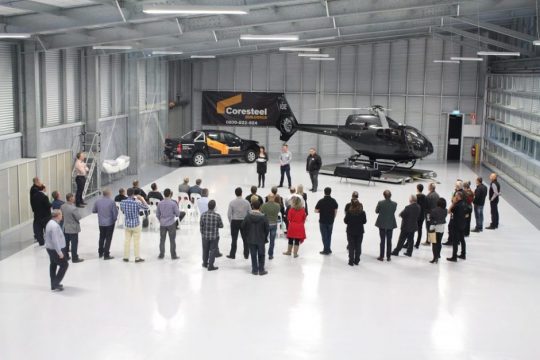 The recently-completed Hamilton Heliport is the base of Hamilton company Helicorp, run by local businessman Brent Glover.

“The showcase evening was a great way to show off our fantastic new hangar facility. The team at Coresteel Buildings Waikato really excelled in helping us to realise the vision of a hangar that is both practical and stylish in its design,” says Brent.

Coresteel’s building system allowed Brent and his team to customise the 1152sqm building to their exact specifications inside and out, to include two 18 metre-wide bi-fold hangar doors and two levels of modern offices.

Joint director of Coresteel Waikato, Gary White, says it was Coresteel’s Bracketless Portal System that proved a real deal maker when bidding for the Heliport tender.

“With no supporting brackets or braces, the Bracketless Portal System is ideal for hangars, as it allows for the best utilisation of the floor and ceiling space – a vital element when storing aircraft,” says Gary.

During the Heliport project Coresteel managed the process from start to finish with their in-house design, engineering, manufacturing and construction teams. This included working closely with Bunnings Warehouse Te Awamutu for the internal fit-out. “This process meant we could guarantee a shorter timeline, while maintaining a cost-effective price for the project,” says Gary.

The Coresteel Buildings Waikato franchise was awarded Best Bespoke Building for the Hamilton Heliport project earlier this year, alongside awards for Franchise of the Year and Highest Sales Volume.

The Te Awamutu-based team comprising of Gary White, Trina White and John Morrow launched into the market in 2008 and have since grown to employ 22 full time staff.

View photos from the event.